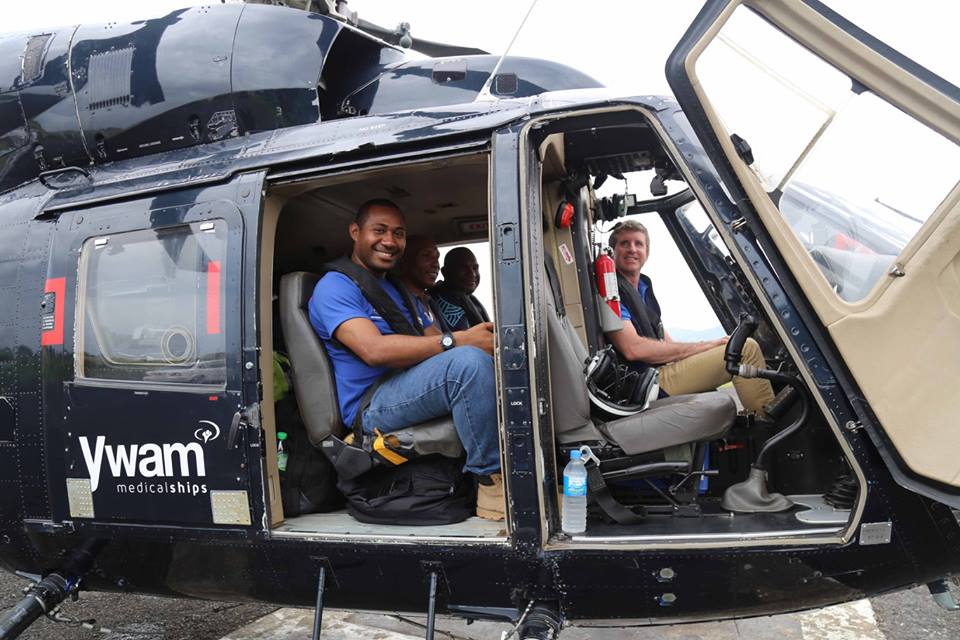 Siassi Island Diary (Part 1: Getting to the island)

Tuesday, June 20: My flight from Port Moresby (I was working here with WHO at the time of the outbreak) took me to Lae, where I met with the Provincial health team and soon after checked into Huon Gulf Hotel.

Wednesday, June 21: We spent an entire day waiting for a helicopter to take us to Siassi Island. The weather never cleared, so flights were delayed until the next day.

Thursday, June 22: The day commenced at 6:00 am. After a day of waiting for a helicopter to Siassi and not being able to fly due to bad weather, we didn’t want to miss the opportunity today. The weather was somewhat better, although the pilot made us no promises of when, or if, we would be leaving for the Island. Rachel, the pilot from New Zealand, understood the importance of our trip and put us into the ‘life recovery’ category which allowed the helicopter company to take greater risks with the weather than they usually would. We were on our way by 8:30 am.

I was the co-pilot, so had an amazing view; the scenery was stunning. We went along the coast rather than over the mountains due to cloud cover. At one point we had to land because the visibility was so poor. We landed just outside a village and soon enough all the kids were running over to the helicopter. Rachel had to jump out and warn them to stay away from the spinning blades. The clouds and mist cleared a little and we were on our way again. We were no more than 15 minutes in and Rachel said we might have to turn back. Thankfully, the clouds cleared a little and we pushed on.

The helicopter company we were riding with mainly transports medi-vacs from rural health centres, mostly of women who have complicated deliveries. Rachel was telling me a few stories of their experiences – a very rewarding job. There’s no doubt the pilots of this company are very passionate about what they do.

After flying past some more beautiful coastline, we headed over the water and arrived at the ‘Lablab’ Health Centre about an hour later. There wasn’t much there. It was much smaller than I anticipated. We had to unload quickly to avoid using up excess fuel (the helicopters only have enough fuel to make it to the Island and back again). Several people from the Island jumped on board for a trip back to Lae.
After unloading, we were greeted by the board members of the Lablab health clinic, and some medical staff. We then jumped in the back of a landcruiser ute and made our way to the village. Everything was wet and the roads were extremely muddy. After almost getting the 4WD stuck, we arrived at the village and unloaded our gear and were driven right back to the clinic. We reviewed their medical records and talked to the staff.

The staff informed us that there was an increase in the number of people visiting the clinic with high fever, and many were being admitted. The main concern were the recent deaths in children; there were 3, all boys aged 5-8 years. Their symptoms included very high fever, blood in urine and blood in stool. They all died within a few days of each other. The records were well kept, but we couldn’t go back to review previous years as the nurse was on maternity leave and had locked all the records in her office. We took pictures of the records so that we could enter the information and analyse it in more detail when back in Port Moresby.

The health clinic is comprised of 4 buildings; the first block is the outpatient clinics and some offices for the health staff. The next is the general ward which has capacity for about 20 beds. There is also a Tuberculosis (TB) ward and a newly constructed maternity ward, not yet in use. It was very basic, and there was very little in the way of supplies. There is a boat that comes to the Island every few weeks, but the distribution of medical supplies is a persistent problem in PNG. The boat ride takes 9 hours and is very dangerous due to rough seas and pirates that are known to patrol this stretch of water. WHO, quite understandably, wasn’t very keen on us using boats to get to the Island. Sadly, several years ago a boat carrying a medical team from a public health reference laboratory in PNG went down in this stretch of water.

The nurse we met on the ward was wearing a NSW Health shirt, I have no idea how she managed to get hold of that!

We reviewed the cases on the ward admitted with fever. There was a little boy who was sitting in his bed not making a peep. His temperature was 39℃. Poor little guy. He was positive for malaria and was treated right away. Most of the others were negative for both malaria and dengue.

We made our way to the nearby village by foot as the vehicle was off doing something else. We walked from the clinic, down through a school, to the beach. After hitting the beach, we walked along the sand until we came to the village.

At one point during our walk, we had to cross a river. As we were trying to make a bridge out of logs, one of the villagers came over with a canoe and ferried us over. We met some betel nut traders who had come across from West New Britain Island (evidently they don’t grow betel nut here on Siassi Island). Betel nut is a nut from a palm tree that people chew for energy. It’s like caffeine, and in addition to an energy boost, it suppresses one’s appetite. The downside is that it causes cancer of the mouth and esophagus. The betel nut traders were stranded on the island because of rough seas.

We met the village chairman and the village magistrate and arranged to come back on Saturday to conduct household interviews as tomorrow (Friday) we were visiting another village further up the coast; this was the village where the 3 boys who died had come from. The two villages are currently fighting each other as one has accused the other of sorcery resulting in the boys’ deaths. Belief in sorcery remains strong in PNG and many do not accept natural causes of illness and death. The belief that sorcerers and witches deliberately use their supernatural powers in order to harm other people is common. Several homes have been destroyed, but no one has been killed as of yet. The somewhat unusual and mysterious nature of the deaths (all boys, all around the same age, all from the same village, all with the same symptoms, and all within a few days of each other) provided the community with ample reasons for suspicion. One of our roles will be to mediate this conflict and hopefully de-escalate the tension and restore a measure of peace to the area.

After coming back to the clinic, we were informed that we would be sleeping in the new maternity ward rather than in the village for security reasons. It’s actually a good option. It is brand new, has actual beds, as well as a toilet and shower. We dragged out some mattresses from the storeroom and felt incredibly well catered for. The generator runs for a few hours each night, usually from 6-9pm. After we settled into our accommodation we told stories and played cards until the generator went off. We talked a lot about the bible, ancient plagues and the history of PNG. A fascinating team – Mathias, a doctor from Port Moresby who I have worked with for several years with the field epidemiology program; Edwin, the Provincial Disease control Officer (and former field epi graduate), and Roy, an environmental health officer. Another doctor, Mary, also came and he is staying with the nurse in her home not too far away. Mary is a current field epidemiology fellow and will be doing this investigation as part of her field project.

A few shots from the trip. 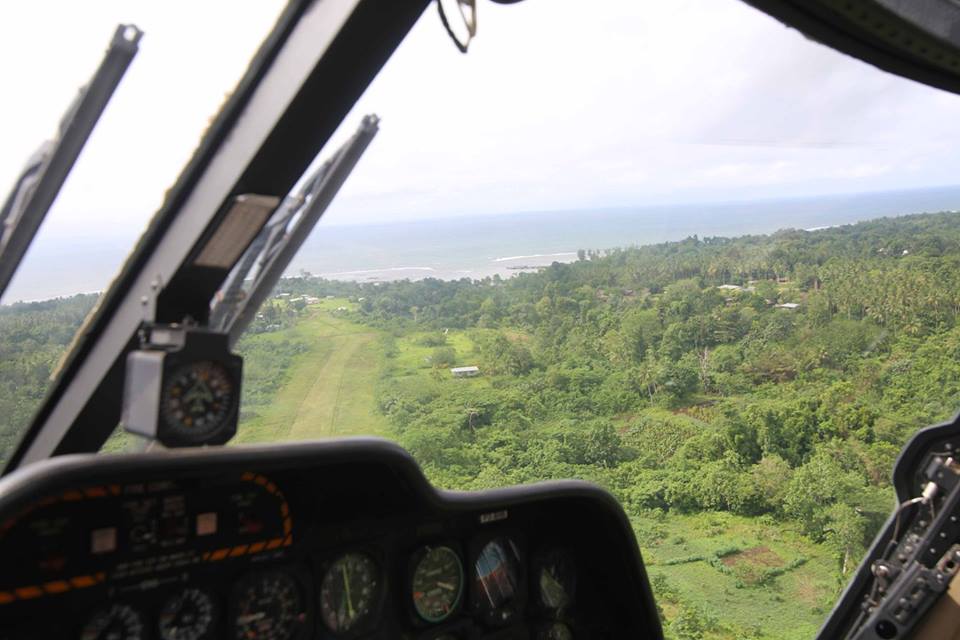 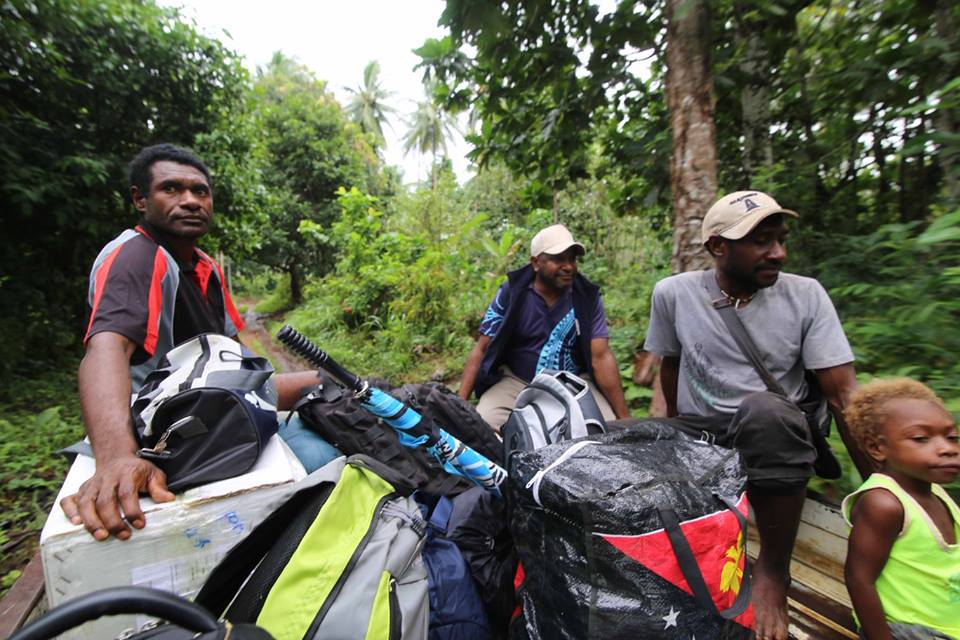 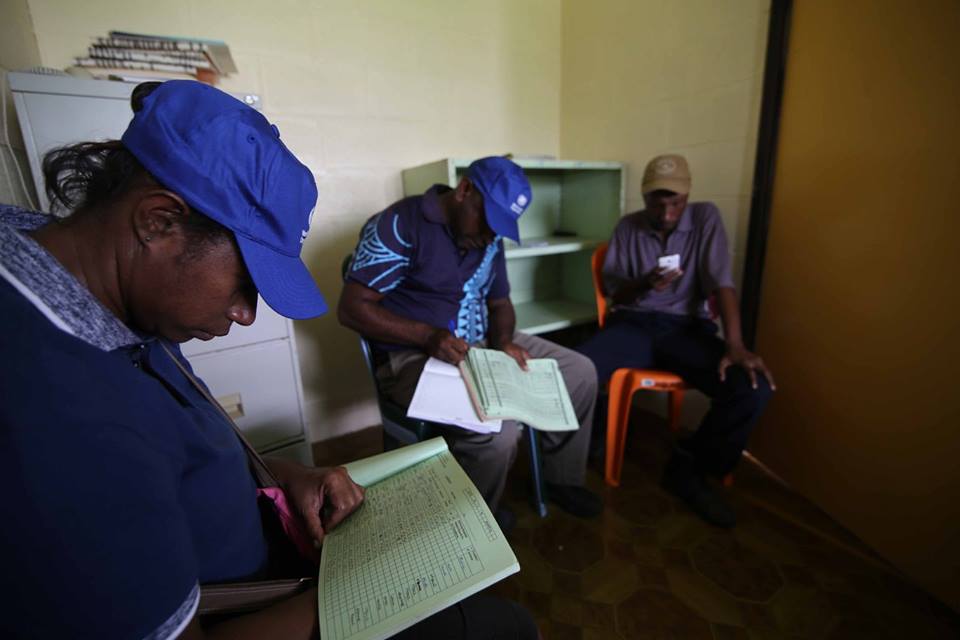