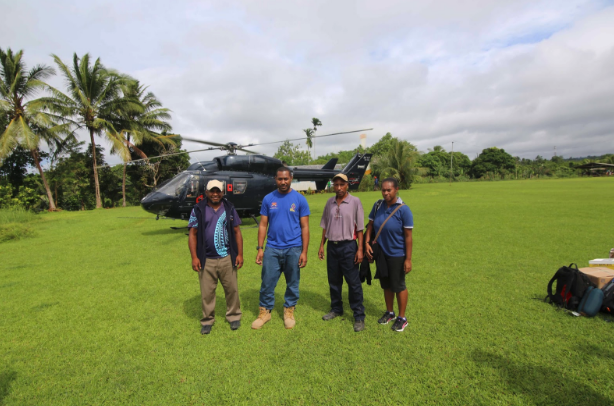 Saturday, June 24: We are at the other village today, the one close to the clinic. Once again, the community was called together and we met in the church. It was a huge structure made from bamboo, open sides and a sand floor. The pews were also made from bamboo. As in the other village, it was right in the centre of the community. They rang a bell (old gas cylinder) and everyone came. This time we all decided to set up base in the church rather than go from house to house. So we had 4 stations; 3 interviewing teams and one testing team. The families all patiently waited and when it was their turn, they came to one of the interviewing teams and then anyone who was ill was sent over to the testing team.

There were several positives for malaria, but again the vast majority were negative for dengue and malaria.. A couple of villagers describe a new type of mosquito recently introduced; unfortunately we don’t have an entomologist on the team. There were some little kids with fevers above 40°C, one looked in particularly bad shape and was barely conscious. There were several babies, kids and adults with very scaly skin; their skin was literally flaking off. I asked Mathias what was the cause and he said it’s a very hard to treat fungal infection. Just another of the many health challenges being faced in the villages.
The day went well, we spoke to every family in the village and were done by 4pm. We stopped for a coke and were given some mangoes by one of the local families and then headed back to the clinic.

Mathias and myself went for a walk down to the wharf, a couple of kids from the village quickly volunteered to escort us there. We did some wharf jumping and enjoyed the swimming in the ocean. On the way back we took a ‘short cut’ which involved swimming across a river. We were already wet, so why not. We had a quiet evening. I spend a few hours just sitting outside the ward playing with the kids and talking to those waiting outside. The kids here are so cute, really shy at first, but with time they warmed up and soon we were kicking a soccer ball and playing handball. One of the women waiting outside had walked 8 hours to the clinic with her husband who had a broken leg. There are no plaster casts, so it’s back to the basics. A man came with high fever; he was barely conscious and had stopped speaking. He was in a wheelchair and the poor lady, presumably his wife, couldn’t push him across the grass and mud. I helped get him into the ward and Mathias checked him out. He was negative for malaria and dengue as well.

We played cards again while the power was on. The two provincial folks were chatting away until 4.30am. There was also the usual snoring and people getting up for the bathroom at all hours. Not a whole lot of sleep happening.

I was up at 6am to send a weather report to the Helicopter company. It was overcast and had rained during the night, but it wasn’t too bad. We received word that the chopper was on its way and would arrive just after 9am. We packed up our gear and as soon as we heard the chopper we went outside and said our goodbyes. The helicopter doesn’t turn off, so it’s a quick load and we were on our way. I’m in the co-pilots seat again, I think they are nervous about asking a local to sit there in-case they accidently hit one of the many buttons by mistake. The pilot is an older German guy who is the owner of the helicopter company; he has been flying in PNG for the past 36 years and just loves it here.

The flight back was amazing. On the way over, we went around the coast and then across to the Island. This time, we had to drop off some medical supplies at a small village and then we went through a mountain range back to Lae. The small village we dropped off our supplies was called Wasu and had recently reported an outbreak with similar symptoms to what we were investigating on the Island. Evidently this village is not a normal village; the provincial guys are afraid to go there as the last time an outsider went in (a policeman from Lae) he was decapitated. So, needless to say, the drop off was rather fast. We unloaded the boxes of medical supplies and then simply took off figuring out someone would get the boxes to the clinic.

The trip over the mountain was something else. We flew along a massive ravine with a river below us – the 7th fastest flowing river in the world evidently. The mountains, towering each side of us were almost vertical. We had to weave our way through the clouds and at one point fly right above the clouds. The pilot then had to find an opening in the clouds to be able to descend again; so we were weaving and looping around through the clouds until we were back under them again. It was a good thing we had an experienced pilot. However, Mathias and Mary were convinced we weren’t going to make it and were going rather pale. Business was booming for this helicopter company, at $6000 USD an hour to charter the helicopter, I was surprised they had any business at all. Given the turrain and lack of air strips, there aren’t too many alternate trsansport options in emergency situations. This company does all the medivacs for the provincial government, sometimes up to 7 a day.

We arrived safely in Lae and had a quiet afternoon. The next day we briefed the senior managers in the Provincial health department and made our way to the airport, a 45 min drive out of Lae. We then caught our flight back to Port Moresby.

All in all, a very interesting trip. We have lots of data to analyse and hopefully the blood samples sent to the lab will find out what was causing this nasty outbreak. For now, we have treated several people for malaria and given the community advice on controlling mosquito populations. We also have another shipment of mosquitoes nets scheduled for next month. The Provincial health team will do a follow-up visit in a few weeks to assess the impact of the advice provided regarding mosquito control.

Afterword: The specimens were shipped to the PNG Institute for Medical Research, all came back negative for malaria, dengue, zika, chikungunya and a few other viruses. The mystery remains. Calm remained between the villages and the number of new presentations with febrile illness dropped to baseline numbers. Mary graduated from PNG’s field epidemiology training program and continues to work in the public sector as a public health physician. Mathias received a promotion in 2018 and now manages the national immunization program in PNG. Mathias has led several other outbreak investigations since this one and remains a key trainer in the PNG field epi program. PNG continues to develop rapid response teams and is working towards implementing an advanced field epidemiology training program.

Shots from the trip: 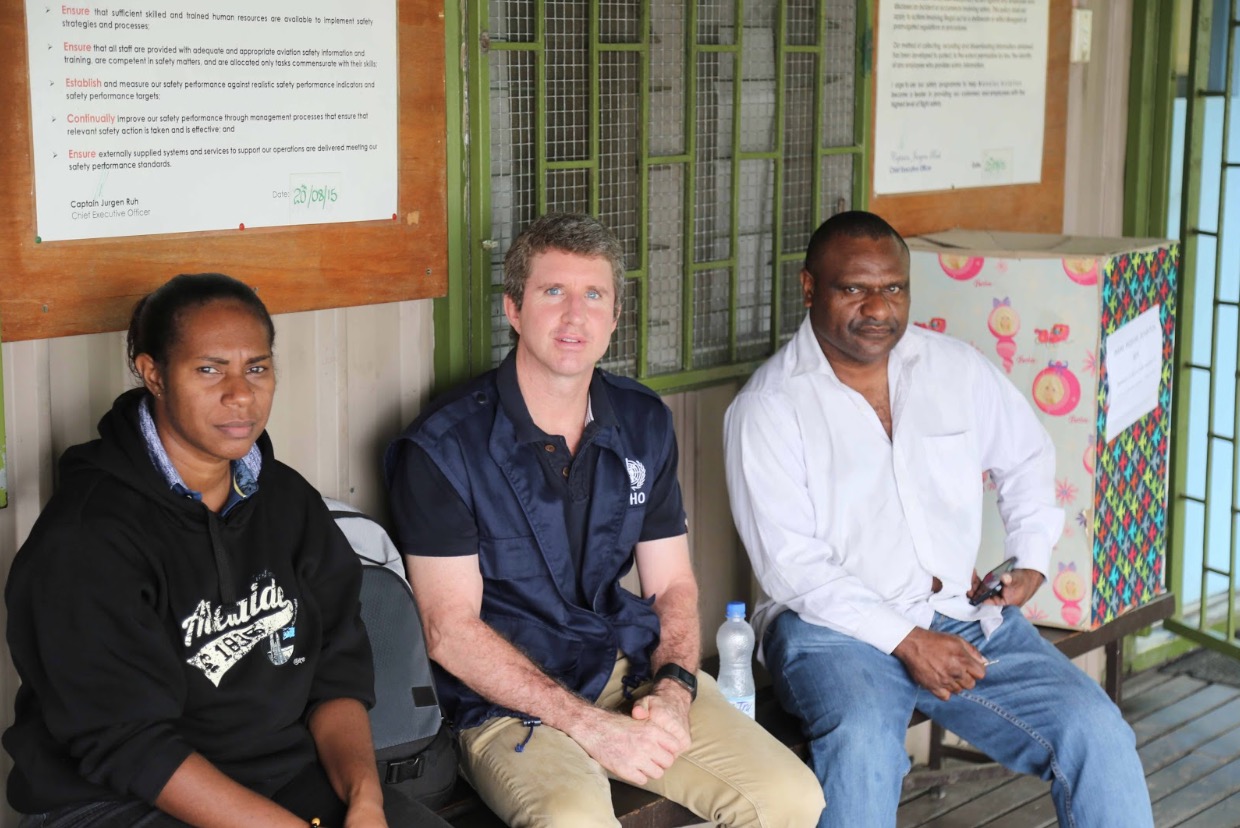 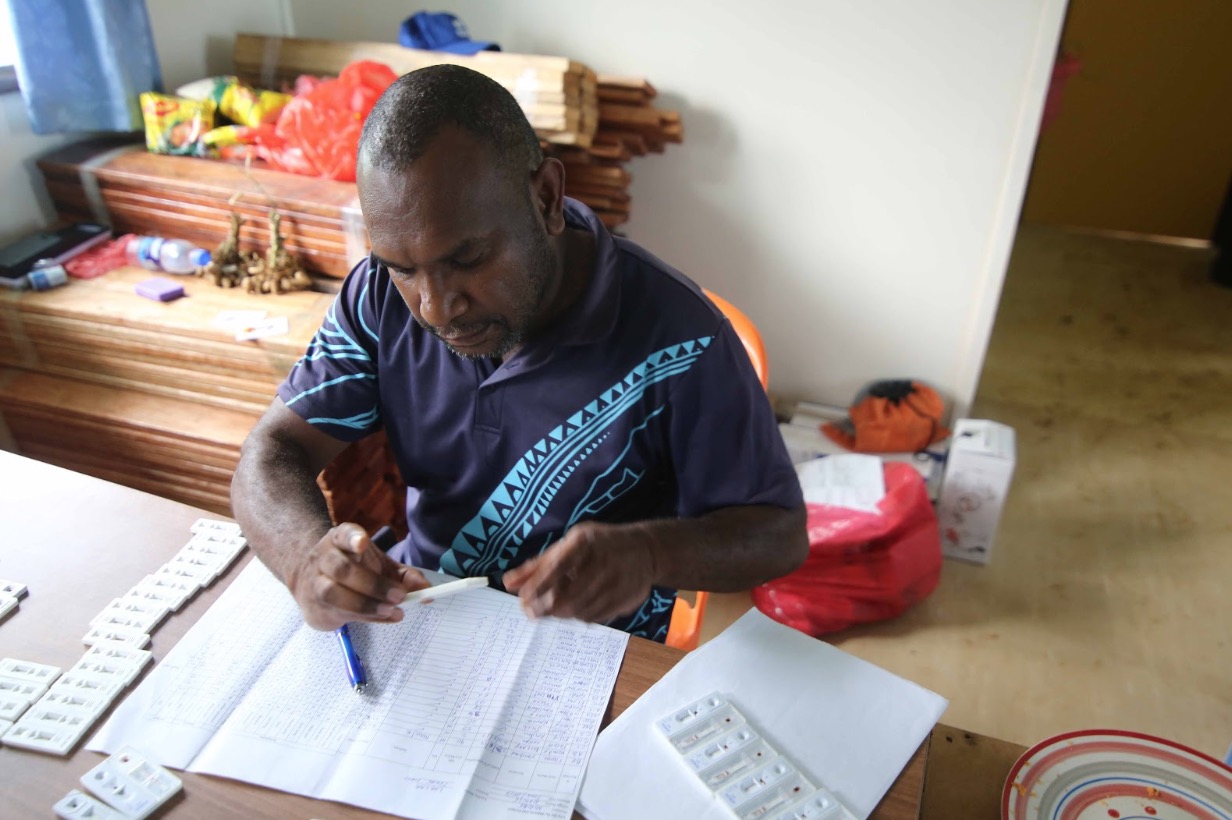