Today on the show, Sujani speaks about leadership once again.

We introduced the topic of leadership in public health on the PHSPOTlight podcast in episode 12 with Nadia Akseer. In that kick-off episode, we committed to bringing conversations with more of our peers around the topic of leadership. We want leadership in public health to be a skill that you are constantly thinking about building on, as much as (if not more) than building technical or software skills. The conversations we are choosing to share with you are with leaders who are not only our peers but those who we feel we can learn a lot from and be inspired by to take real action.

In this episode, Sujani sits down with Anjum Sultana. Anjum is someone Sujani has known for a number of years and has interacted with via phone calls and messaging/email, but this was the first time they both “saw” each other (virtually), so it was a special conversation. Anjum’s advocacy and leadership work is also something that Sujani has been inspired by over the years.

The conversation with Anjum is not only jam-packed with inspiration and motivation to be a leader in public health but also weaves tangible first steps for all of us to take.

Public health needs many strong leaders to push agendas forward, and we hope that by sharing stories like that of Anjum’s, you walk away feeling like you too can be a leader in public health.

Recently named the 2020 Global Woman of Distinction by the United Nations NGO Committee on the Status of Women, Anjum Sultana is an internationally-recognized advocate for progressive public policies to create a more just and equitable society.

Currently, Anjum serves as the National Director of Public Policy & Strategic Communications at YWCA Canada, the nation’s oldest and largest women’s serving organization. She also serves on the boards of a number of organizations including, Regent Park Community Health Centre, Toronto Environmental Alliance and the Council of Agencies Serving South Asians; and sits on several research, organizational and policy advisory committees. Anjum is also a Global Shaper for the Toronto Hub, affiliated with the World Economic Forum, a Founding Advisor of Progress Toronto and served as Canadian Delegate at the 2019 G7 Youth Summit in Paris, France through Young Diplomats of Canada. Recently, Anjum was appointed to CivicAction’s Re:Action Task Force which feeds into and advises various COVID19 recovery tables throughout the greater Toronto region. She is also part of the Ontario Council for International Cooperation’s Gender Equality and Youth Policy-Makers Hubs. She is also an Advisor for the 2020/2021 Action Canada Public Policy Fellowship Programme.

Anjum holds a Masters of Public Health from the Dalla Lana School of Public Health at the University of Toronto. Anjum is also the founder of Millennial Womxn in Policy, a grassroots organization and community of practice that connects more than 3,000 young women and non-binary people working in policy across North America and Europe in civil society, politics, private sector and public service.

Join the challenge mentioned in the podcast! 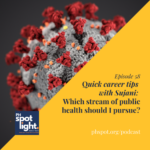 Quick career tips: Which stream of public health should I pursue?

A place where passionate public health professionals commit to take their career to the next level – there is no other place like it online!