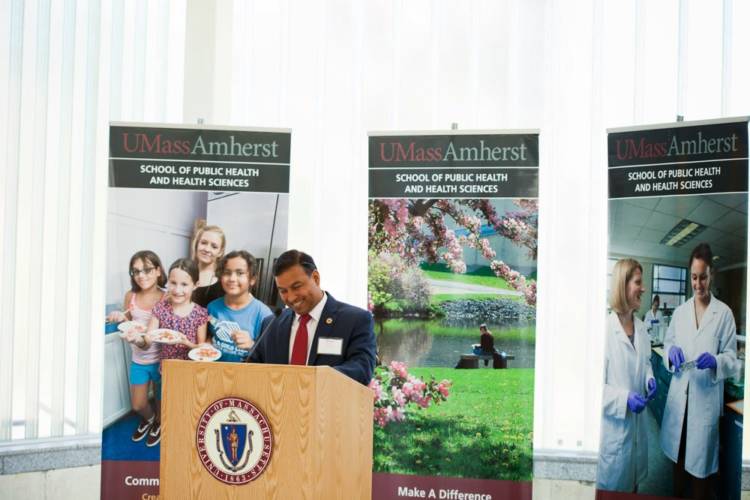 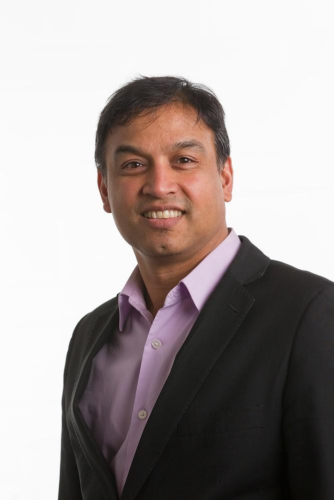 Pictured: The School of Public Health and Health Sciences a the University of Massachusetts Amherst honors Dr. Nazeem Muhajarine, MS ’90, during its 5th Annual Fall Celebration.

“Over the past two decades, Dr. Nazeem Muhajarine has established an exemplary record of research, teaching and mentorship, and service. Working with citizens, policy makers and like-minded researchers, he tirelessly leads innovative projects that have profound impacts on a range of stakeholders. His motto, ‘Think Globally, Act Locally,’ guides his research and has led him to focus, largely, on projects that locally address widespread social issues – such as how income-based social inequality can affect health.”

An interview with Dr. Nazeem Muhajarine

We sit down with Dr. Muhajarine to ask him to reflect on his career path and share with us stories of his journey. His story walked us through many parts of the world, and we hope that his articulated speech and passion for his research is reflected among the words we managed to capture. Happy reading!

Have you always wanted to pursue a career in public health?

Yeah, it’s a great first question and I would have to say to just jump right into it – No. I have not always wanted to pursue a career in public health. As a matter of fact, I was heading to medical school – that was sort of what I had wanted to. I always think back and my mind takes me to a particular year, or month actually, that was really a turning point for me when – instead of applying to medical school – I chose to go to public health. And to preface this, I want to say that I had always known about public health because my father was a Public Health Inspector (PHI) in Sri Lanka. When I was growing up in Sri Lanka, I knew all about the work he was doing. He was a typical PHI who would do a variety of things like restaurant inspections, housing, immunizations, as well as family planning workshops. So, I was well aware of public health, and also the work of the Medical Health Officer (MHO), who my father would have reported to.

Back in 1995 when I was doing my undergrad in Ohio, I went to Sri Lanka in January to work on a project. The project that I associated myself with was called “The Colombo Project” which was funded by UNICEF. This project took me to the slums and quarter settlements in Colombo. I was very interested in talking to these people who lived in these slums and quarter settlements, and I asked them how their lives would have changed with the implementation of the UNICEF funding.

The focus of The Colombo Project was improving sanitation and water supply. I created a survey and basically knocked on doors, which was very easy. People were very welcoming, people sat me down and just told their stories to me. I was blown away by these warm and resilient people who despite their circumstances were optimistic and happy (by and large). They had concerns about their health, children, water,, access to sanitation and so on. That really changed my mind. I came back to Ohio for my second term and started taking Sociology courses. I then decided to take the jump into epidemiology.

Growing up in a family where you know what your father’s occupation is – it’s normal to get encouragement to do better. There was an abundance of encouragement for me to go into medicine. I had done my Advanced Levels in biology, zoology and botany in Sri Lanka. I also had a high school certificate in California (I was there for an exchange term). I had all the requirements but I strongly believed that public health was more impactful because it was addressing concerns and needs of populations and groups of people, rather than one person at a time. I was fascinated by the research side of public health and also the larger impact it had in comparison to medicine.

Sounds like your experience in Colombo was an inspiration for your career in public health. Would you say any other experiences added to the motivation to continue down that career path?

My experience in Sri Lanka was an inspiration. And also, when I did go to the School of Public Health at the University of Massachusetts, I met wonderful people (my peers and professors). They cemented my decision to go into public health and specifically epidemiology and research. My father was also very happy (although he wanted me to be a doctor). I have no regrets. Given the choice to do it all over again, I would make very little changes.

What are some projects you are currently working on? You’ve also done some interesting international projects, could you tell us a bit about those?

I’m going to highlight two big project areas for you:

Multisectoral Urban Systems for health and Equity (MUSE) in Canadian cities: A couple of projects that I’m co-leading with some research groups is the continuation of some work we’ve been doing for the last 7-8 years with the Smart Cities, Healthy Kids work. With this project, we are really looking at the important areas of the built environment, but particularly urban planning; how do we build cities and neighbourhoods of cities that can be conducive to people’s health. What we’re doing in this project is to really dive deep into understanding how citizens in four cities (Montreal, Toronto, Saskatoon and Vancouver) understand and are aware, or receive changes to the built environment (e.g. putting new bike lanes, bridges, rapid transit); and how they are understood and received by the people who live in the city. We want to also know how interested individuals are in changing their built environment and also participate in the change. It’s really looking at the interface between the interventions and the people living in the communities. Part of the project is also to understand how municipalities in conjunction with public health schools or university researchers make decisions relating to interventions – how intersectional partnerships form and lead into specific decisions. We’ve actually received a CIHR grant to study this.

International Work: We are working in the Republic of Mozambique and are interested in launching an intervention to prevent and mitigate maternal mortalities (pregnant woman losing their lives during childbirth or soon after) and sometimes their children as well. We’re approaching this intervention from a women’s rights/sexual reproductive rights framework. The premise is that women need to find equal space and place in their families, communities and societies. And when they’re given this rightful place, it’s not only good for them, but also their children. A part of this is also education but we’re looking at it from a maternal health perspective. This is a 5 year project and we’re trying to get funding from the Canadian government for this.

It’s a lot of work but really exciting!