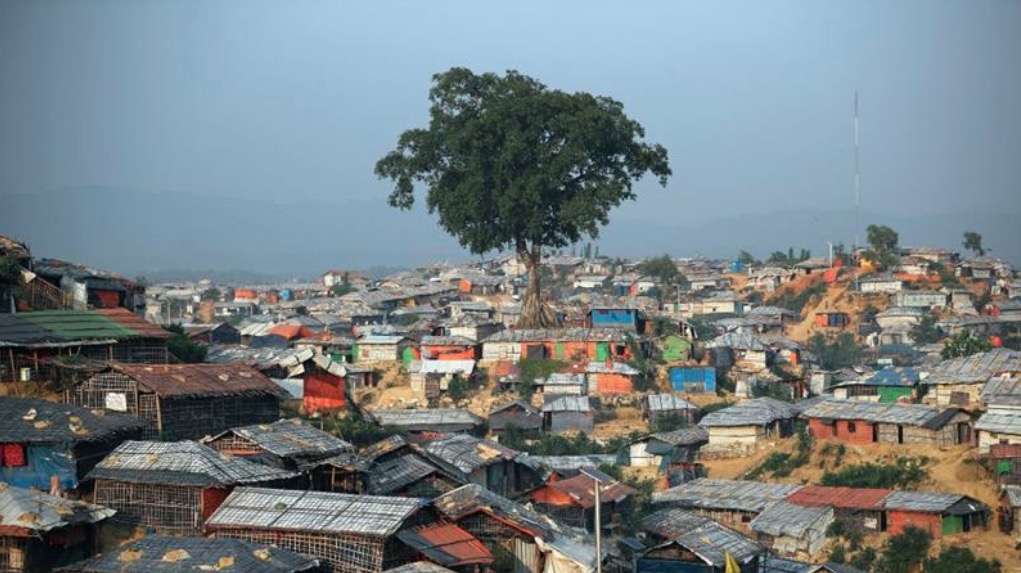 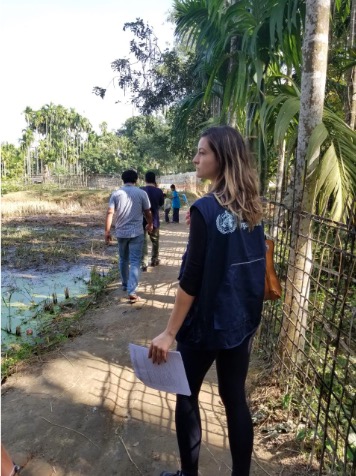 Field Epidemiology: from lectures to latrines

“May we see your latrine?”

Our translator, who spoke English and Bengali, turned to a second translator (who spoke Bengali and  Chittagonian, a local dialect similar to the Rohingya language) and asked the same question…who turned and asked the tiny old woman sitting on a small stool in front of us in the local language…”may we see your latrine” (toilet).

All of the interactions in the camp had to be like this, filtered through multiple layers of language.

The tiny old woman nodded and led us behind her clay and bamboo hut, down a muddy path. The large latrine had a concrete base and a metal door which swayed half open in the wind. There was no lock. All ten households in the block used the same latrine.

Miraim and I peeked inside.

Clean. It had recently been emptied.

To our surprise, outside the latrine was a plastic hand washing station. We opened the lid. Nothing but dirt and fermented leaves. No soap anywhere.

Earlier that week we had been alerted by Médecins Sans Frontières (MSF) (also known as Doctors Without Borders) partners that there was a cluster of bloody diarrhea cases in this camp, and they had asked for support from the WHO to investigate (Figure 2). I was part of the investigation team, which was led by the Water Sanitation and Health (WASH) specialists. This was not a rare new request. We were often deployed to the camps to investigate such alerts. Given the crowded living conditions and high levels of malnutrition, the potential for outbreaks to spread was always high and it would have  devastating results, with the potential to kill thousands.

On the way back, we checked neighbouring household for other people with symptoms of bloody diarrhea who may not have gone to a health facility to seek medical care. We wanted to make sure nobody who was sick was missed (Figure 2). We also stopped to take a water sample from the well where the community got their drinking water, and coordinated with our WASH colleagues to ensure that each house on this block received a sanitation package and instructions on water handling and storage. 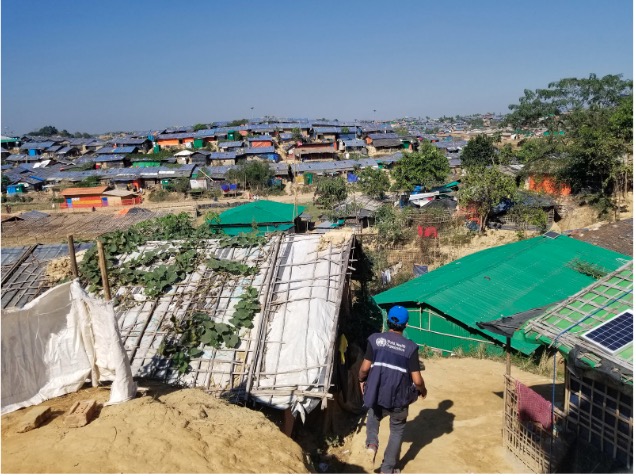 Figure 2: One of my Bangladesh colleagues checking households for people exhibiting symptoms of bloody diarrhea

The crisis in Myanmar has a very long history. Nearly a million Rohingya refugees have fled violence in Myanmar in successive waves of displacement since the early 1990s. The latest exodus began on 25 August 2017, when violence broke out in Myanmar’s Rakhine State, driving more than 700,000 people to seek refuge in Bangladesh. The pace of arrivals created the fastest growing refugee crisis in the world and resulted in the concentration of refugees in Cox’s Bazar being amongst the densest in the world. In this area, the United Nations High Commissioner for Refugees (UNHCR) estimates there are 1.3 million people in need. Over 55% are children under the age of 18. As you can imagine, there are a wide range of basic needs for people living in these camps. They include:

To provide these needs requires a wide and complex set of stakeholders with clear and effective coordination. The response to this crisis is led by the Government of Bangladesh – with support from various partners including 127 international and national NGOs, 12 United Nations (UN) agencies, The Red Cross, and many more civil society actors, including faith-based organisations, and government-to-government support programmes (Figure 3 depicts this complex relationship).

The WHO office that was responsible for coordinating the health sector for the Rohingya refugee response was located on two floors of a hotel in the centre of Cox’s Bazar, a city on the south west coast of Bangladesh, which boasts the longest natural sea beach in the world running 120 kilometres. It is about a 1.5 hour drive from the camps. On a bad day the traffic can make it a 2.5 hour journey. We always had to be back before nightfall. Security precautions. 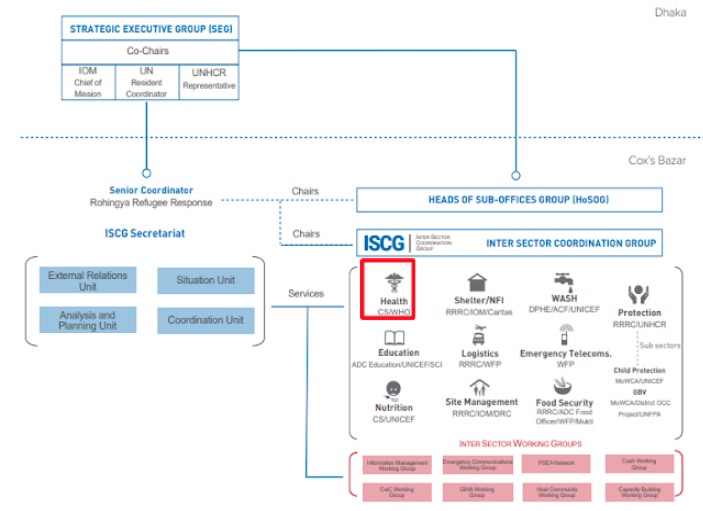 Figure 3: The various partners involved in the Rohingya Refugee Response.

The Epidemiology and Surveillance team consisted of two local doctors, two local analysts and two to three epidemiologists from across the globe. We worked closely together and were responsible for conducting and coordinating the surveillance of epidemic prone diseases in the camps. Surveillance was conducted using the Early Warning and Response System (EWARS), basically a surveillance system in a box. It included cell phones, servers and a specially designed software system that could be deployed anywhere in the world, enabling large surveillance networks to be set up within days of an emergency.

On a weekly basis, the team was responsible for analyzing and summarizing the EWARS data provided by the health facilities in the camps, creating situational reports and presenting to our healthcare sector partners and other stakeholders in the camps (Figure 4 is an example of such an analysis).

We were also responsible for responding to disease alerts generated by health facilities inside the camps. When an alert was generated, the epidemiology team reviewed it and decided if it required action. For the cluster of bloody diarrhea cases that MSF alerted us to, a field visit was required, and so we mobilized our team to camp 26 to investigate. We conducted four field investigations during my five weeks there – considered to be a slow time of year for my colleagues. Earlier that year, a diphtheria outbreak had spread through the camp, and required round the clock surveillance, contact tracing and vaccination support in the field. 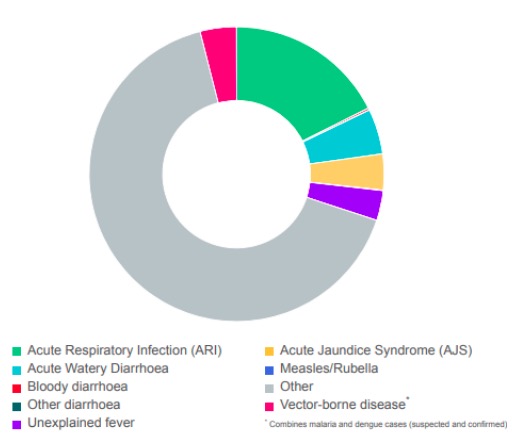 Figure 4: Example of a weekly analysis that would be submitted (“Proportional morbidity for week 49, 2018)

My mobilization to Cox’s Bazar lasted five weeks in total (an average time period for a Canadian Field Epidemiologist). My deployment was an important period of my professional public health career that prompted the reflections I want to share with you here.

Reflecting back on my path to a career in field epidemiology, I can say the following: Building a career in public health takes grounded vision, patience, perseverance and most of all…time.

During my Masters in Public Health at the University of Toronto (U of T), I was very interested in the unique problems associated with emergency preparedness and response, and I found so much value in my global health lectures; but I didn’t really know a clear path to follow, in order to work in this field. As much as I wanted to, I was not able to take an international internship (with the WHO)  because of the financial costs. It was only after working at a local public health unit for two years that I happened to hear about the Canadian Field Epidemiology Program. It sounded exactly like what I needed to continue to grow and move forward in my career – it aligned with my vision. So, I applied, and promptly got rejected.

I applied again….. and was rejected, again.

I applied a third time, and finally got accepted!

It was in the second year of the program in September 2018, that The Global Outbreak and Response Network (GOARN) requested two surveillance officers to support the Rohingya Refugee Response. I was one of five second-year field epidemiologists in the cohort that year. I had expressed my interest in international mobilizations from the moment I walked through the doors of the program, and I was lucky that I was one of two people chosen to go.

If you’re someone who is also interested in field work, here are my top tips for you to consider and act on (today!):

A note on building your toolkit

There are obvious technical skills you need to consider developing to be an epidemiologist or to support public health emergencies. These include being competent in data analysis/surveillance, having experience with outbreak or field investigations, and oral and written communication skills. However, when it comes to building your toolkit, give equal importance to the following “soft skills”:

I graduated from the Canadian Field Epidemiology Program in the summer of 2019, and am now working with the Training and Development Unit at the Public Health Agency of Canada, helping to prepare the new cohort of field epidemiologist. In this role I am building my toolkit with a new set of skills, including facilitation and leadership, which I know will be valuable as I continue my career in public health.

But …field work is never far from my mind or heart, and I know I’ll be back when the moment is right.

“People who do this type of work talk about the rupture we feel on our return […]  We talk about how difficult it is to assimilate, to assume routine, to sample familiar pleasures. The rift, of course, is not in the world: it is within us….The world is a hard place — a beautiful place, but so too an urgent one. … Once that urgency takes hold, it never completely lets go.” – James Maskalyk, Author of  Six Months in Sudan

Amalia Plotogea is a Canadian Field Epidemiology Program (CFEP) graduate (2017 – 2019). For the past two years she has focused on the surveillance of sexually transmitted infections at the British Columbia Centre for Disease Control, with projects focused on the molecular surveillance of gonorrhea, and evaluating the enhanced syphilis surveillance system. During her time with the CFEP she investigated a provincial salmonella outbreak and was deployed on two mobilizations: First, to a remote community in Nunavut to provide epidemiological support for a Tuberculosis community screening, and most recently as a surveillance officer in Bangladesh to support the World Health Organization’s response to the Rohingya refugee crisis.
All Posts